CFA Institute has released the results of a survey that gauges opinions on the key issues currently facing investment markets in the Middle East and North Africa (MENA). The results show that investment professionals believe political stability and good governance would have the most positive impact on MENA’s economy. In addition, respondents stated that freedom of labour and capital and regulatory alignment would help stimulate investment in the region; MENA’s securities regulators should primarily focus on investor protection; China will have the most positive economic influence in MENA; and Saudi Arabia and Qatar will experience the strongest economic growth in 2013.

CFA Institute, in collaboration with member societies in the Middle East, conducted this online survey from 19 February to 3 March 2013 to coincide with the Middle East Investment Conference being held in Dubai on 20–21 March 2013. The survey was distributed to members and candidates in 11 countries across the Middle East and Northern Africa and received 188 responses.

Stability and good governance were recurring themes throughout the survey. Half of respondents indicated that stability and good governance would have the most positive impact on the MENA economy in 2013 and 19% of respondents believed investment in infrastructure would. The importance of stability for investment professionals in the region probably explains why respondents seemed concerned and were divided about the possible effects of the Arab Spring on economic growth in the next five years: 49% thought the Arab Spring will decrease the economic growth rate whereas 38% thought it will increase the growth rate.

What do you think would have the most positive impact on the MENA economy in 2013? Similarly, the majority of respondents (70%) indicated that improved corporate governance practices would improve investor trust and confidence across markets in the MENA region. Interestingly, this was the highest support given to any one issue in the whole survey.

Poll: What do you think would improve investor trust and confidence across markets in the MENA region? 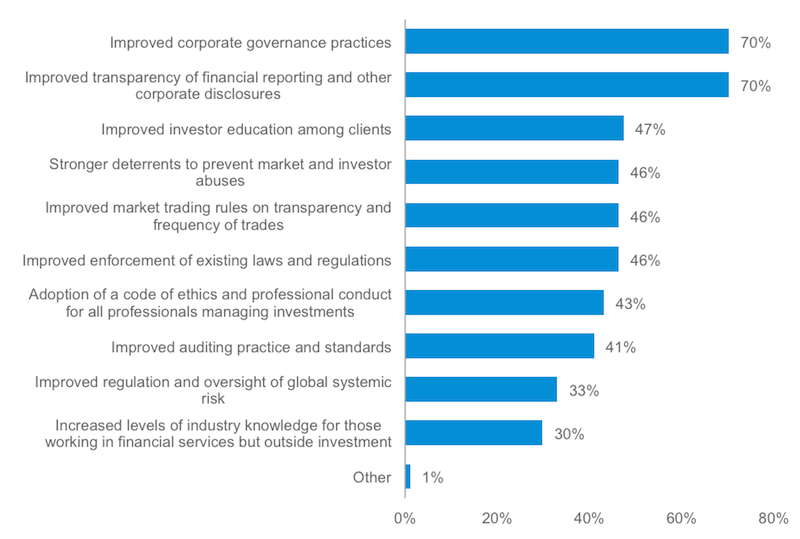 When asked what would stimulate investment in the MENA region, freedom of labour and capital, regulatory alignment, and a common economic trading zone were regarded as the most important factors. Other respondents favoured a single capital market and a single currency. We will be further exploring the topic of economic integration in MENA interests at the Middle East Investment Conference, so be sure to catch the live stream in which distinguished researchers, Dr. Adeel Malik and Dr. Bassem Awadallah will discuss the “Economic Fragmentation of the Arab World”.

Poll: Which of the following, if any, do you think would stimulate investment in the MENA region? When asked what the primary focus should be for regulators of securities markets in the MENA region in 2013, the majority of respondents (57%) said protection of investors whereas 35% believe they should focus on the reduction of systemic risk. We will share this finding with the panel of regulators at the Middle East Investment Conference who will be discussing current issues and future regulatory developments in MENA and get their thoughts on the response.

Poll: What should be the primary focus in 2013 for regulators of securities markets in the MENA region? Interestingly, the majority of respondents (46%) indicated that the country they think will have the most positive foreign economic influence on the MENA region over the next five years is China (24% chose the United States and 12%, the European Union). The importance of China on the MENA economies is a significant change over the last few years. Peter Zeihan, a geopolitical strategist, will be covering the Arab Spring and China at the conference, and we will ask him to share his views on the survey results.

Poll: Which country or region do you think will have the most positive foreign economic influence on the MENA region over the next five years?

The survey respondents were clear when it came to indicating which country will have the strongest economic growth in 2013, with more than a third choosing Saudi Arabia (34%), a third choosing Qatar (33%), and almost a quarter choosing the United Arab Emirates (23%). No other country came close. In fact, the countries that have experienced regime change in the Arab Spring — Egypt, Tunisia, and Libya — or have been more directly affected, such as Bahrain, are clearly not the favorites for economic growth in 2013.

Poll: Which countries will have the strongest economic growth in 2013? View the full survey results and read our conference blog to keep up with the latest debates and insights on these issues from leading speakers.